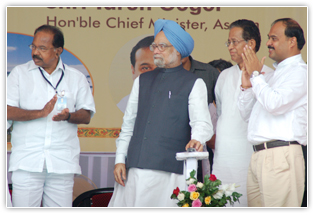 It was in this scenario, the Government of Assam, under the inspiring and farsighted leadership of Hon’ble Chief Minister Sjt. Tarun Gogoi and with  the dedicated and untiring efforts of Hon’ble Minister of Health & Family Welfare, Govt. of Assam, Dr. Himanta Biswa Sarma , decided to establish three new medical colleges at Jorhat, Tezpur and Barpeta in the state of Assam in 2005 so that these medical colleges would  go a long way towards meeting the need for trained human resources in all spheres of health care delivery in the state.
Jorhat was selected as a site for a new medical college to bring advanced  and state- of- the- art medical education and tertiary health care facilities to middle Assam, the area between Guwahati and Dibrugarh. It has been thought that this medical college at Jorhat would cater to the health care needs of about 1.2 million population of Jorhat with three subdivisions at Moriani, Titabar and the famous river island Majuli. Besides these, the Jorhat Medical College would also cater to the healthcare needs of the neighbouring four districts of Sibsagar, Golaghat, Karbi Anglong and Lakhimpur. It will also benefit patients from the neighbouring states of NE India namely Nagaland and Arunachal Pradesh. 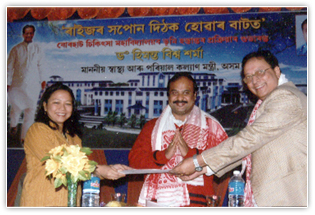 In order to facilitate rapid development and an atmosphere of working autonomy, the Government of Assam formed for the new medical colleges. In Jorhat “Society for Medical Education, Jorhat” , under the Chaimanship of the Hon’ble Chief Minister Sjt. Tarun Gogoi, was formed and registered by the Government and was entrusted with the task of establishing the medical college.
Meanwhile the Government of Assam appointed Dr. Dhrubajyoti Borah, Professor of Medicine, Gauhati Medical College as the first Principal of the Jorhat Medical College, Jorhat. Shouldering the big responsibility, Prof. Dhrubajyoti Borah joined as the Founder Principal of Jorhat Medical College. With the formation of the Society for Medical Education, Jorhat and under the able guidance of Prof. Dhrubajyoti Borah the process of establishment of the college progressed satisfactorily.
To build up an integrated campus capable of housing the necessary infrastructure the Government of Assam decided to acquire land from private owners for the college. Accordingly 62 bighas of private land was acquired at a cost of Rs. 5.47 crores by the Jorhat district administration. The land was formally handed over to the college authorities at a public function held on 19 February, 2008 and presided over by the Hon’ble Minister of Health & Family Welfare, Govt. of Assam, Dr. Himanta Biswa Sarma. The amounts due to the owners of the land were paid on the spot. The process of land acquisition was completed in an amicable atmosphere. 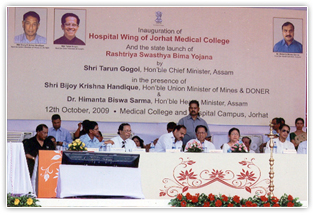 The “Bhumi Puja” to start construction  works at Jorhat Medical College was performed on 1st June, 2008.
On the auspicious day of 25th August, 2008, Hon’ble Prime Minister of India, Dr. Manmohan Singh laid the foundation stone of Jorhat Medical College, Jorhat.
Through  National Competitive Bidding Architect Consultants were appointed on behalf of the Society for Medical Education, Jorhat by the State PWD department. The architect M/s Hospitech Management Consultants Pvt. Ltd. were entrusted with preparation of the concept plan and master plan for the college. With the approval of the plans and  drawings by the authorities, the construction works have been started and are going on in full swing.